Frida was born on July 6th, 1907 in Mexico, Coyoacan. Her parents were also Mexicans, and the father owned a photography business. She lived with her parents with her four sisters, two of whom were half-sisters from the first marriage her father had. They struggled with financial difficulties which made Frida face tough childhood. When she was six years, she suffered from polio and was forced to be in bed for nine months. After her recovery, the right leg was deformed, and due to this, she limped when she walked. She was nicknamed ‘Frida, peg leg’ by her classmates (Frith and Tomie 12). When she was still young, she had a passion for studying medicine. In 1922 when she was 15 years, she enrolled in a National Preparatory School of the University of Mexico to a premedical program.

While still at the institution, she took part-time drawing classes. It is at this point where she met Diego Rivera, a famous Mexican painter. Diego, later on, played a significant role in her life. He influenced her passion for painting through constant encouragements (Frith and Tomie 22). In 1925, September, Frida was involved in an accident which was critically fatal that dramatically changed her life. She broke her right foot and had serious pelvic, ribs and spinal column injuries. She recovered from the injuries, but she was left physically fragile. She was forced to abandon her medicine classes. Due to solitude, she started painting. In 1928, she joined the Communist Party and became a member (Kettenmann 18). During this time, Frida did embrace her painting skills and saw herself as a serious artist. She decided to make artist her career. She sought more advice from Diego. Frida became successful in her paintings and even taught art in schools.

Frida was a great admirer of Diego, and this culminated to a romantic relationship. In 1929 August, they got married. While in her marriage, she went through a series of miscarriages which left her depressed and emotionally scarred. Strain in their marriage made both Diego and Frida seek comfort and sexual pleasures outside their marriage. Diego’s involvement with Frida’s younger sister, Christina caused their divorce in 1939. Eighteen months later, Frida and Diego reunited and got married again. Her health started deteriorating in 1946, and she was to undergo an operation on her spinal cord which proved to be unsuccessful (Kettenmann 14). While on her hospital bed, she continued to paint and on July 13th 1954 she died.

Analysis of some Frida’s Works

A well-renowned artist, Frida captured the eyes of many through her magnificent paintings. Most of her paintings reflected her life story. Frida states, “I painted my own reality” (Morrison 21). Her paintings were inspired by the biography she created and depicted her extraordinary life in overcoming the pain she went through. She had to endure her infidelity husband together with the pain of not being able to have children. Her works also depict the historical context, and they are a reflection of the historical events of the revolution period (Morrison 43). Besides, her works are categorized as Surrealist in the historical context. 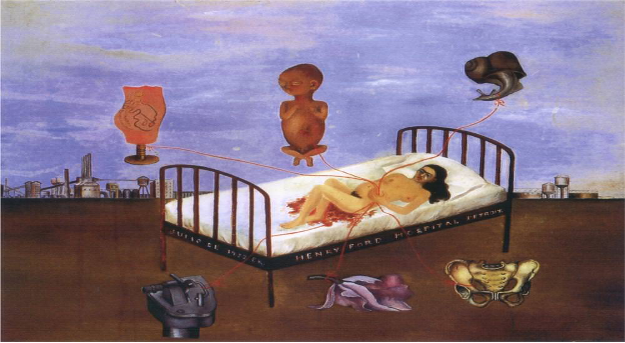 The image is a painting that is disturbing and shocking to the viewer. Frida is lying at the Henry Ford Hospital bed. She is the pivot in this painting, and her face is in despair. There is blood on the bed which is an indication of the pain she had from the miscarriages. Six paintings are connected to her abdomen. The foetus represents the miscarried baby; the snail represents the slowness in the ordeal of operations, while the female anatomy image shows how her female system has failed her. The surgical machines represent the pain she went through in operations while the withering orchid flower represents the flower given to her by her husband. This painting portrait is a mixture of fantasies and reality.

Self-Portrait with Thorn Necklace and Hummingbird, 1940 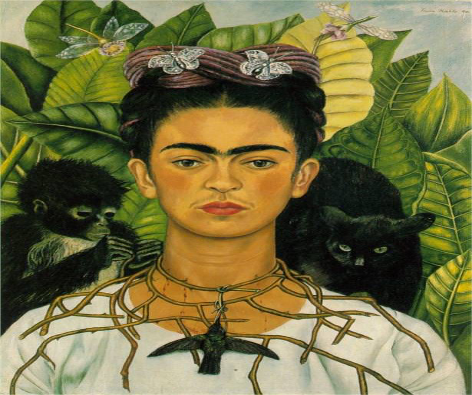 In this portrait, Frida painted herself with thorn necklace which has Hummingbird on it. This painting contains some elements which are very symbolic to the life of Frida. She directly faces the viewer, and the background has enormous green leaves and a yellow one behind her head. Besides, in the back, there is a monkey, and a cat and her neck bleed from thorns that pierce her neck. Her expression in the painting is calm, which shows how she is slowly enduring her pain. The particular bird hummingbird that she uses symbolizes life and freedom. Frida lived most of her life in painful moments after the bus accident. She had to endure approximately 35 operations which would help in fixing her body. The divorce Frida had prompted her to make this painting. The bird is also a sign of hope to her.

Self Portrait along the Border between Mexico and the United States, 1932 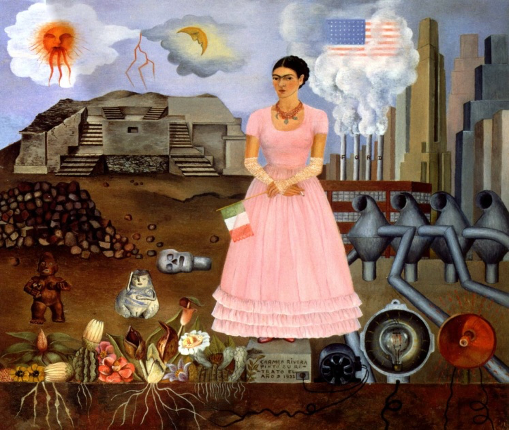 In this painting, Frida is dressed in a pink dress with gloves on. She is standing on the boundary stone, which is on the border of the US and Mexico. The moon and the sun are only in Mexico, and it indicates that Frida wanted to be in Mexico because she loved her country. She loved Mexican culture. Frida’s face is poised with mischief. In one hand she is holding a Mexican flag, and in the other she has a cigarette. The holding of the Mexican flag reveals how loyal she was to her country. In Mexico, is seen to have flowery plants while in the US, there are three machines.
Frida’s life is a pack of inspirational lessons that have to be emulated. In her living and painting life, she pointed out that, in life, however hard it may sound to be, it is worth living. She is a great inspiration to women. She demonstrated that a woman should have the strength to handle all difficulties she faces. Also, she vividly showed that everyone has to embrace what he or she does the way she loved her art work. Her love for the country where she was born is a revelation of how people should be loyal to their countries. Indeed, Frida was a painter whose works will always be an inspiration, especially to the women and other painting artists.

Frida’s paintings were highly influenced by traumatic psychological and, physical events that happened to her life from childhood to her adulthood. She was also faced with questions of her national identity from her mixture of Mexican and German ancestry. Her works are Surrealist categories due to the disturbing themes in her paintings. She was an icon artist in the historical context, and her works are still an inspiration to the current artists. Through the use of her life tragedies, she managed to produce paints that were emotionally disturbing.

312 15
report
This content was produced by one of our Experts or a Student. It should be used for reference purposes only.