Description of the Events

The space shuttle Columbia disaster is among the two serious crashes to have ever happened in the space shuttle missions. The shuttle broke apart on February 1, 2003, some seconds after re-entering the earth atmosphere (Marsh, 2015). It killed all the seven crews who were on board. The accident occurred in Texas at around 9:00 AM EST (Eastern Standard Time) within an altitude of 60 km, but the debris of the astronauts, and the shuttle were scattered in more than 2000 locations southern of Texas and Louisiana (Whitton & Cross, 2018). The shuttle disintegration happened some minutes before expected to land in Columbia Kennedy space center. The disaster was almost similar to spaces shuttle challenger, which broke apart a few minutes after launch in 1986 (Whitton & Cross, 2018). The challenger disaster also left all the seven astronauts dead like the Columbia space shuttle.

It was the 28th Columbia’s space shuttle mission originally expected to be launched on 11th January 2001. The mission delayed to 16th January 2003 due to numerous reasons (Garrett, 2017). After the launch of the space shuttle foam, isolation disintegrates from the propellant tank of the shuttle and hit the edge of the left wing although it was able to it make to space (Garrett, 2017). The videos focused on the launch of the spaces craft indicated a foam of collision but engineers could not establish position and level of damage U.S. air force TV cameras recorded the disintegration of the shuttle. 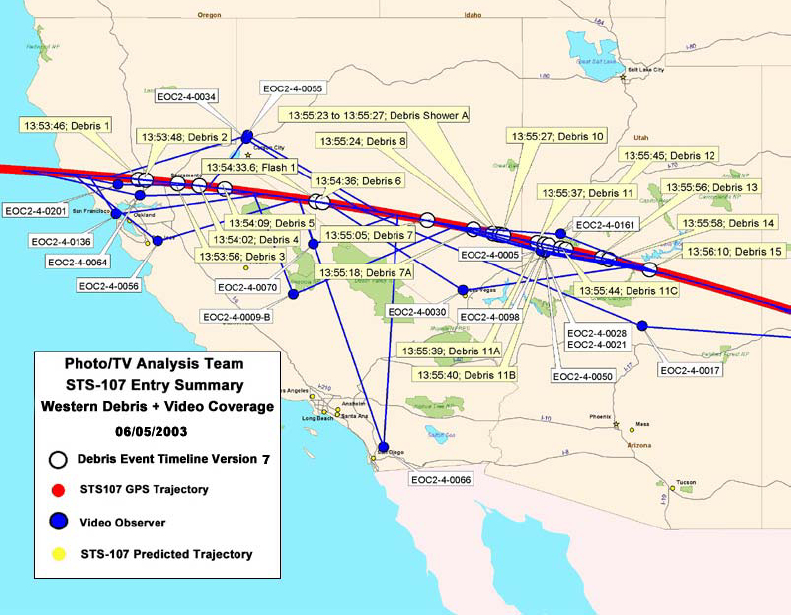 The investigation indicated that the major cause of the catastrophe happened during the launch of the craft. The event film taken after the launch of the craft indicated the insulation foam broke from the propeller tank 81 seconds after the craft lift off (Whitton & Cross, 2018). The foam struck the edge of the left wing of the shuttle although the National Astronauts and Space Administration (NASA) engineers thought it could not cause detrimental effects. They base their standpoint on past missions where the foam had detached without any serious mishap (Lu, 2017). From the previous incidence, studies had indicated that it was capable of making a larger hole in covered carbon isolation tiles that controlled shuttle noise and led the wings not to withstand extreme temperature in the earth atmosphere. Although some NASA engineers insisted for the review of the film after the launch of the craft to assess the damage, their request was ignored by the senior NASA officials (Whitton & Cross, 2018).

When the Columbian Shuttle reentered the Columbian atmosphere, it experienced extremely high temperatures. The hot gases penetrated the craft, damaged the carbon-carbon tiles, and melted the left wing of the craft (Garrett, 2017). It prevailed to the disintegration of the orbiter before the shuttle grounding. Data from the shuttle indicates the upsurge of the temperature in some locations of the left wing at 8.52 AM, but the crew noted the incidence just a minute before the craft disintegration (Garrett, 2017). The investigation done by the Columbia Accident Investigation Board and NASA indicated defective manufacturing control of tank isolation as a major cause of the disaster.

The Columbian disaster had very devastating impacts to NASA, space missions, engineers, scientist, and American community. The safety goals of space missions were anonymously affected by accident. The total loss of the shuttle had the greatest economic impact on the vehicle goals as well as NASA fraternity. Even if the disintegration of the shuttle was a result of foam insulator, the shuttle hurt the engineers in the design of vehicle equipment. The disaster affected the goal of the mission specialist since they did not materialize. The mission specialists had been in space for sixteen days to conduct biological and physics research but never make it back to communicate their findings (Garrett, 2017).

The disaster left seven specialist astronauts’ dead, which had a greater social impact to the families, colleagues, and American population at large. The disintegration of the shuttle also affected the environment in Texas and Louisiana where the debris was scattered. The analysis of the incidence indicated debris of size 53-68cm by 30-45cm dispersed in various locations had negative environmental impacts since they contained hazardous chemicals (Marsen, 2015). The disintegration of the shuttle made the public to fear for their safety.

The shuttle disaster devastated NASA confidence, which had a greater impact on long term reliability of the agency. NASA was responsible for the safety of the crews in the shuttle, but it failed. The NASA flight team made a hard decision to prevent such incident from happening in the future since the agency had already lost two of its space flights. The engineer communities such as JSC, MSFC, and KSC who designed the shuttle felt guilty of the incident (Dick, 2018). Negative sentiments were raised toward NASA safety precaution since the tragedy happened in the eyes of many spectators and elected leaders. The disaster raised doubt that cannot be easily erased on the value of human life in spaces flights. Although astronauts, politicians, engineers and support personnel maintained a stand that space exploration must continue, the majority of the public believed that spaceflight was a risky endeavor of human life and money.

Before NASA could declare disaster as a contingency, the first eyewitnesses of the disaster had responded to the incident as the terrorist attack. The first response of NASA was to recover the debris of the shuttle and crews after the incidence. The Federal Emergency Management Agency (FEMA) conducted recovery of the shuttle debris and crews in collaboration disaster response teams. Recovery agents and professional staffs assisted in securing confidential equipment and contain and recovers hazardous items. More than 500 FBI agents were deployed in Texas and Louisiana to assist in recovery efforts and prevent harm to the public (Dick, 2018). The recovery effort that lasted for more than three months involved a gigantic team of experts and volunteers. More than 25000 individuals from 270 organizations were involved in search of the shuttle debris in a land of 2.3 million acres. Remains of all astronauts were recovered while only 38% of the shuttle debris recovered (Dick, 2018). The other parts had disintegrated to tiny particles that could not be recovered. The serial number of the tile of the shuttle was recovered and used for investigating the cause of the tragedy.

After the catastrophe, the Columbia Disaster Investigation Board was deployed to investigate the main cause of the accident. The team compiled the finding and released the report on August 26, 2003. The report analyzed three sections, which were the physical cause of the disaster, pressure, and reaction of the shuttle, and influence of political and economic systems to the scientific purpose (Dick, 2018). Environmental American Program (EAP) conducted an environmental hazard analysis and found that the remaining debris had no hazardous effect on the residents in the area.

After the criticism of NASA by media and several organizations, it became more vigilant in space innovation technology in a matter of observing public and crews safety. After the disaster, NASA redesigned external tank and implemented other safety measures in space shuttle STS 114 launched on July 2005. Such measures include the use of cameras and robotic arm by the astronauts to scan for broken tiles. NASA also increased the number of cameras that provide a precise snapshot of the foam shedding (Oswald, Savage, & Zaretsky, 2015). Due to more foam shedding in STS 114, it postponed its spaces flights until July 2006 when improvement was made to the problem. Since then STS 121 maintained continuous flight to complete construction of space station in 2009.

The space station was a safe place for astronauts to shelter in case of another case of foam release. The space shuttle program retired in July 2011 where NASA started a commercial crew program in collaboration Soyuz spacecraft. Other companies such as Boeing and Space X prospect to start commercial crew flights to space in 2019 (Oswald, Savage, & Zaretsky, 2015). The resilience of the local area was done by EAP and FEMA in collaboration with other several organization to ensure that the debris is less detrimental to the environment.

Studies indicate that the accident was a product of the capitalist system that overrules the safety mechanism of modern science. The framework of geopolitical and economic system dominate elite scientist and technology. For modern science to be resourceful, it requires a huge amount of capital and international coordination (Lu, 2017). Due to this issue, a space program should not clinch on political interest and private economics but should be based on scientific perspectives. It is recommended that in future the space flight to consider the presence of a social system to maintain society and crew safety. Finding an alternative mode of transport to space is an important measure to reduce the occurrence of a similar incidence.

99 13
report
This content was produced by one of our Experts or a Student. It should be used for reference purposes only.