Home / Sample base / Psychology of The Minority Experience

Psychology of The Minority Experience

I attended a cultural event of an Islamic service at Darul Barakaat Mosque on the 29th, 2019 of November for the dawn, sunrise, noon, afternoon, and the sunset prayers. The Mosque is in Birmingham city, England.

History of the Islamic Culture

Islamic religion started back in the year 610 CE. Its founder Muhammad is believed to be a spiritual man who spent a couple of months in prayer and contemplation while under a secluded cave near the city of Mecca, and in this cave, he received divine messages. The narration says that one-morning, Muhammad heard angel Gabriel speaking to him and that through the angel, Allah spoke words of wisdom to him, and later they were spoken to his disciples. The words got recorded, and they came to be known as the Qur’an. Muhammad’s believers consider the Qur’an as direct revelations from Allah and not the works of Muhammad. The word Islam means submission, which got its origin from the teaching of Muhammad the prophet expressing surrender to Allah’s will. Sunni and Shia represent the two Islamic groups; they follow the same religion but have different interpretations of specific events and teachings (Islam.com. 2013). Islamic is essential to its community through the charity gives moral character training and preparing them for paradise.

The Islamic custom lies upon its five pillars:

The Muslims base their dressing code on elegance and simplicity. Men in their dressing should ensure they cover their navel to the knee while women should cover their bodies completely, excluding the face visible and the hands. Men, who does not have a close relationship with a woman, should not see the covered body parts of that particular woman. These relations are well elaborated in Qur’an terming them as Halal for their women. These men include their husbands, father, son, and close relatives. The instructions can only be invalidated if a medical emergency happens. Apart from the dresses covering their bodies, one is not allowed to wear see-through clothes exposing their bodies. The cloths should as well not be too fitting the reveal the shape of one’s body, which may allure any many who sees the woman. So, they say, put on clothes that are not too plain about those are good looking. Your clothing should always reveal your beliefs as a Muslim, and never should you be confused with a non-Muslim (Hossein, 2006).

In a Mosque, there is order as none is allowed to make unnecessary noise or unwanted movements. You only here the leading Imams praise and pray unto Allah and then give the congregation time to pray while knelt heads down to the ground. 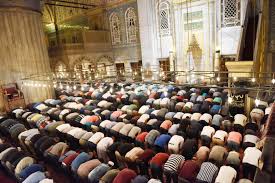 Fig 1: A picture of Muslims praying in a Mosque.

Comparison with my culture

I am a Christian, and; we purely believe in Jesus as the true son of God, whom he sent to save the world, which is different from the Muslims who believe in Muhammad. We both believe in one God who we should and no other to receive the honor. In terms of dress, we Christians have no strict restriction on what we should put on as Muslims do, we have the freedom and right to choose. The Christian family believes in the Holy Bible that was written by different men inspired by the Holy Ghost, while the Muslims believe in the Holy Qur’an written by Muhammad. Lastly, the entire Muslim fraternity has two groups who follow the same religion but have different interpretations while we the Christians have lots of denominations all over the world believing in Jesus but having different fundamental beliefs, and different modes of worship.

The Islamic event I attended is set apart from the Christian service that I am used to in my life. Visiting five sets of prayers in a day and experiencing an orderly and quiet service, strict time observance, the sessions are short, and women and men do not worship together was a new experience in my life. I am used to a long day service once in a week where we turn up in intervals, do a lot of movements, and worship together with children and women.