ABA is rooted in the works of individuals such as Edward Thorndike, Ivan Pavlov, and John Watson. Research in ABA is behavioral in that the subject matter is observable, objectively defined and measurable. Research in ABA seeks to manifest an analytic dimension when there has been a demonstration that an independent variable is exclusively responsible for a change in dependent variable which in this case is the target behavior.

A cardinal component of ABA is social validity which involves inquiry of three factors: (1) Significance of goal, (2) Appropriateness of the procedure utilized, and (3) Importance of the effects demonstrated. In practice, ABA principles have been employed across a wide spectrum of challenges which include, treatment of developmental disabilities such as autism spectrum disorder, juvenile delinquency, and addiction.

In operant conditioning, a behavior is changed through the manipulation of antecedents and consequences. Antecedent manipulation is the changes to stimulus prior to the onset of a target behavior. Consequent manipulation involves reinforcement and punishment. A consequence is what comes right after the behavior. The major disadvantage of using the ABC (Antecedent-Behavior-Consequence) chart is that it is more difficult to see patterns.

A target behavior is a behavior which has been selected for change. If a parent wants a child to learn how to use cutlery, then “use of cutlery” is the target behavior. A target behavior needs to be defined precisely so that data collection and progress monitoring is done easily. The target behavior studied in this paper was throwing a tantrum (kicking, biting and hitting). The goal was to stop the subject from hitting biting and kicking whenever asked to stop playing video games.

A cross-sectional study design was used where a 5-year-old male subject was observed for 3 hours and the time of occurrence and severity of her target behavior recorded. Reinforcements were discharged at a fixed interval of 20 minutes. Data collected was recorded on a data sheet and later subjected to descriptive statistics and plotted onto a line graph. 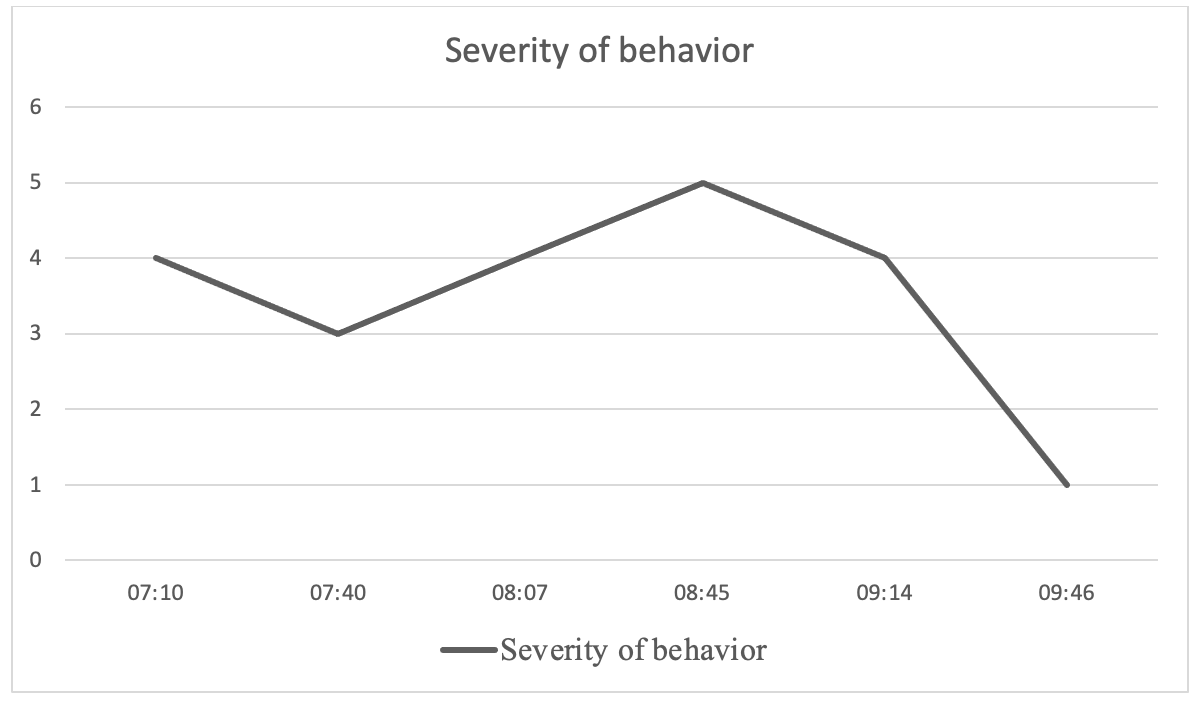 In this case, our target behavior was throwing a tantrum (kicking, hitting and kicking). The Interesponse time was recorded as:

Consequent manipulation involves reinforcement and punishment. Reinforcement is the use of a favorable condition to make the desired target behavior more likely to be elicited. Reinforcements in psychology can be anything that increases the likelihood of a specific response. There are four types of reinforcements; positive, negative, punishment and extinction. Applied Behavior analysis uses reinforcements to effect interventions.

The target behavior on this research was kicking, biting and hitting. The subject, a 5-year-old male, would kick, hit and bite self whenever he was restricted from playing video games. On average he threw a tantrum every 31.2 minutes.

A positive reinforcement approach was implemented in an attempt to stop him from kicking, biting and hitting self whenever he was asked to stop playing video games. The subject has a 2-year-old sister who was praised for being calm and collected. The ripple effect of the younger sister’s praising may have made him seek praise resulting in the substantial reduction in the severity of his tantrums at 0946 hours.

In this case, praise functioned as a reinforcer for the appropriate behavior. A fixed interval of reinforcement was applied every 20 minutes until a desirable outcome was seen. It is assumed that the spillover effect from the younger sister’s praise is responsible for the outcome.

Applied behavior analysis is based on behaviorist theories that state a desired behavior can be taught through systematic rewarding. ABA intends to stop undesirable behavior and teach socially acceptable behavior. The measurable outcome of the research was to see the subject stop biting, hitting and crying when asked to stop playing video games. This research showed that the 5-year-old boy learnt to control his anger whenever he was asked to stop playing video games through positive reinforcement. Positive reinforcement is dubbed to be the most superior and effective type of reinforcement in teaching behavior to children since they seek parental approval and a child feels validated and noticed.

Ferster, Charles B., and Burrhus Frederic Skinner. “Schedules of reinforcement.” (1957).