The significant similarity between romantic composers Franz Schubert and Cesar Frank was the fact that they were unappreciated artists of their time. They were disliked because of their rebellious compositions that broke the common musical elements of the classical period, which gave rise to the romantic period of art. This era was known for its emotional nature, with art, literature, and music composed in ways that evoked intense feelings on different aspects of life. These two artists show how the romantic composers used various techniques in harmonising and other musical elements to make the music more emotional and meaningful at a time when music was structured and was supposed to follow rules of composition strictly (Bruckner 55). Composers and artists of this age felt the effects of the industrial revolution, a time that had a rigid set up to the lifestyle of society. The society was considered to have a career in the capitalistic world more critical than composing music since it brought more money which shows the difference between the composers. While Franck’s father realised his talent and enrolled him in music schools as a child, Schubert was forced to be a teacher in his early life by his father, and later quit this job and moved out of their home to write songs. It happened in 1816, the year he wrote the 5th symphony (Ross 209). As such, the two composers showed why they should have been appreciated more by the society, with their works the beauty and great compositions for the progression of music.

Analysis of the symphonies

Shubert, born in 1797, was the older of the composers, and his harmonies were seen as works of a young composer with amateur flaws in it. His fifth symphony is regarded as the embodiment of his earlier ones and is the greatest of his symphonies according to many musical performers (Bruckner 63). His composition had a massive influence from Mozart’s G Minor, which he used in the third movement of his symphony. The musical piece was seen as a sort of dedication to Mozart’s vocal prowess, something Schubert had grown to appreciate having heard his music since he was a child (Ross 218). 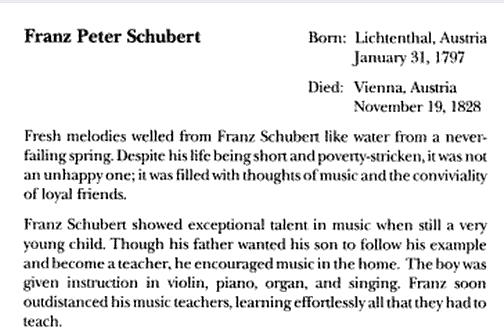 The musical piece is also heavily influenced by Beethoven’s works but seemed to break away and prefer Mozart. The musical composition was considered “chamber music” since it had a watered down list of players, with the lack of clarinets showing a similar instrumentation to Mozart’s works (Schwartz and Hopkins 670). It matched his 40th symphony, and this trait of paying homage to past composers became famous for many artists and composers of the romantic period.

The Mozart’s musical piece has four movements, Allegro in B flat, Andante con moto in E flat, Menuetto in G minor and Allegro vivace in B flat. All through the piece, a theme is played in different keys, with the slow start that was a norm being dropped for fun-filled introduction with tremolo on the violins (Schwartz and Hopkins 672). The theme modulates to different keys as the piece continues, with the underlying sonata form used uniquely. The second movement is usually slow and creates a separate flow to the section. The change of key from E flat to G minor is seen here, and his composition begins to have more emotion as the romantic composers are synonymous. The third movement has a considerable influence on Mozart’s G Minor works, with a fast-paced composition having modulated to B flat major as a standard classical period piece. This shift creates a soft part that is soothing due to its change to the primary key. The abrupt strong theme is reintroduced in the G minor key, and this made his works a marvel for one to listen. The full dynamics of the piece gave it an emotional rollercoaster, with the highs and lows having a shift in tempo abruptly too (Greenberg 26). 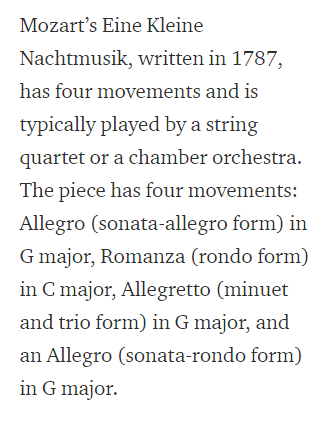 Franck’s symphony came much later in his life, as many of his works did. He was not usually a symphony writer but bowed to pressure due to the changing scene in Belgium and France due to nationalistic views (Antonio). 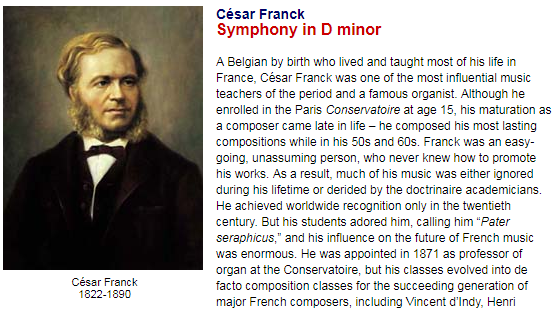 The symphony, which was a German piece of art, was not liked in the French areas, but a growing crowd of Romanticists brought it back to French literature. He too looked back at classical composers like Bach and Wagner but was heavily influenced by Beethoven (Ross 230). 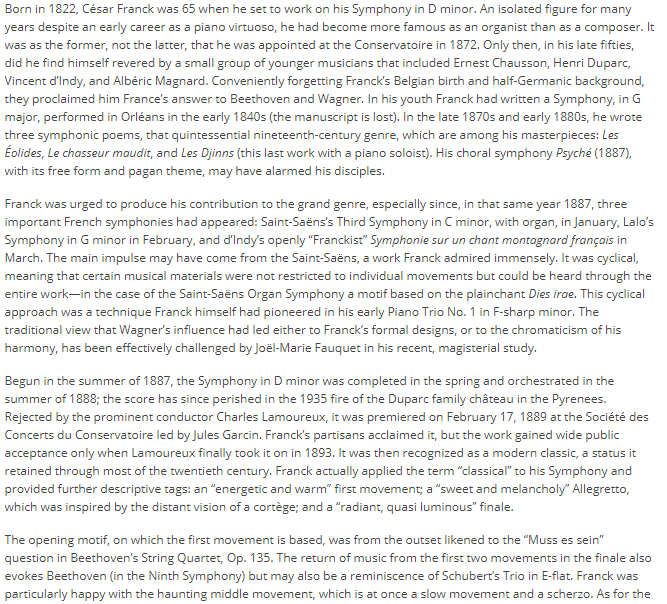 His musical piece had three movements, something unusual to the public at that time. Indeed, this musical piece was highly detested upon its premiere, and many people did not like the deviance from traditional music composition seen in the piece. It was however appreciated much later in life due to its unique nature and meaning in the romantic period. Just as Schubert’s composition, the musical piece has a lot of abrupt shifts in tempo and modulations that copied themes from past composers. The first movement has two tempi; Lento and Allegro non-troppo (Bruckner 61). The melody is soft at the introduction, much like the classical music, but it quickly builds up to a fast-paced rhythm. Frank used different keys to play a continuous theme in the first movement, and this created a slow build up to the central theme of the composition. The second movement is in Allegretto and brings the joyous mode portrayed in the first movement (Bruckner 68). There is pizzicato used to introduce the cor anglais, an instrument that many considered unsuitable for the musical piece. This section usually brings a different feel to the previous movement and adds a soft feel to the last fast-paced music. The keys also show an eerie and gloomy middle that modulates to joyous, happy keys in the end. The third movement then returns to the first theme and maintains the allegro non-troppo tempo that was in the early movement (Ross 48). The different shifts in harmony and melody made this a perfect example of romantic composition, with the constant modulation and change in tempo causing an emotional reaction from the overall performance of the piece. 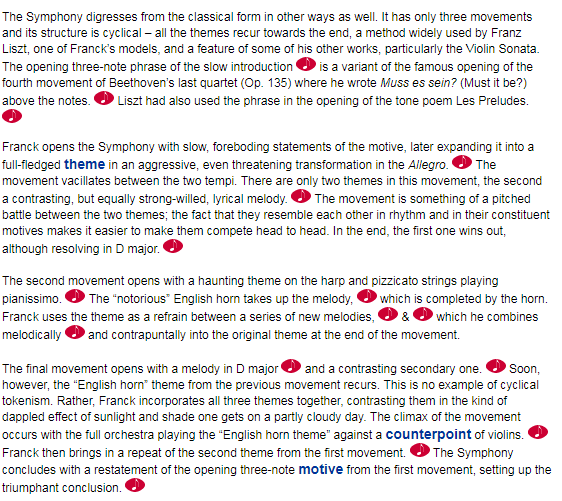 Harmonies analysis and their effect

The different keys used in pieces show the romantic notion of rapid changes in mood and how they affected the message of performance. Despite being vilified by many, the two pieces showed how romantic composers imposed their style over their classical role models and created unique pieces of art to better their trade. The 19-year-old Schubert was considering the influence of Mozart on chromatic harmonies, which Mozart portrayed in his string quartet in C major. The constant modulation in the piece is used to evoke different emotions throughout the piece, unlike the classical compositions where a theme was set throughout the music to ensure uniformity (Schwartz and Hopkins 673). 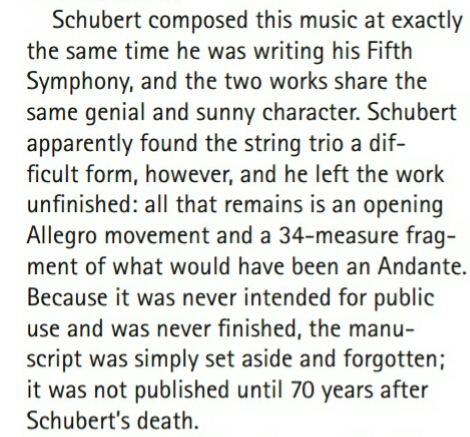 In Schubert’s music, the change of modulation was vital in bringing the different ideas out, and he used this to make models out of classical composers. Being a young composer, he relied heavily on other compositions to learn and create, but he was a creative musician who formed new content that the public found too modern for them. Franck was also detested for his expressive music, and his symphony shows why this was so. After making three movements in a symphony, he also used the chromatic harmonies to incorporate the cor anglais, and in so doing ensures that the emotional nature of the piece overcame the structured rules of composition (Greenberg 51). The instrument led to him being questioned, but the role it plays in shifting the mood of the music is far more telling of the meaning it portrays. The romantic composers focused more on the emotions that the music described, and this led to new techniques such as modulations in the movements that would create unique melodies as they interchanged from one instrument to another to set the tone. Schubert’s music shows a continuation from the fourth symphony and begins as it ended. He continues this cyclic form synonymous with romantic composers by using different keys to change moods and add more emotion to the music. The two composers thus created a style of modulation that would be important to the emotional value of romantic music (Bruckner 98).

Schubert and Franck show in these two musical pieces the brilliance of romantic composers who deviated from the rules of music to make exciting music that had more emotion and relayed a message. The creation of Schubert’s 5th harmony and Franck’s symphony show how the constant modulation in between movements helped create creative pieces that were appreciated much later after the composer’s death. The composers also displayed the romantic trait of appreciating past works of composers. Schubert used Mozart’s G minor movement in his piece and showed how the problematic modulation techniques were used, with the campaign going from small to essential keys throughout to shift moods. Franck also uses this modulation technique to change the feeling of his middle movement, which has a scherzo and slow pace mix that grabs attention. Each composer adds a unique style to their music, with both using Beethoven as a role model to make music. They also had different composers to rely on, with Schubert using Mozart and Haydn music while Liszt and Wagner influenced Franck. The homage to past artists makes the pieces all the more emotional, showing the relation with past greats who had changed the face of music for musicians. Therefore, Franck’s and Schubert’s symphonies showed the growth of the romantic period when artists broke the rules of harmonic and melodic composition to create emotion in their music.