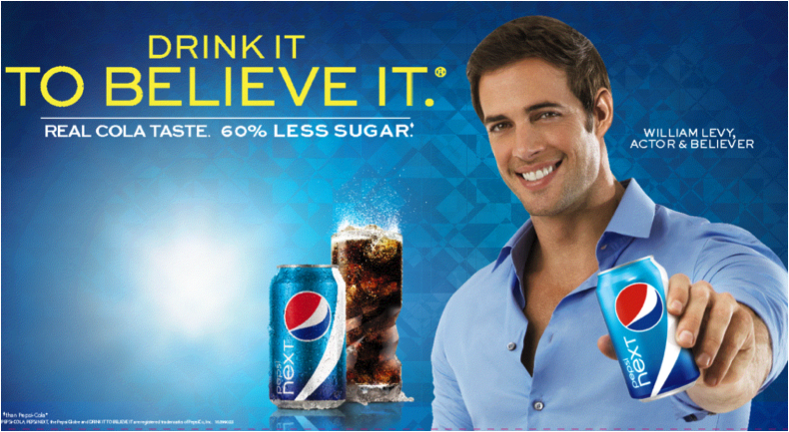 Pepsi is a beverage drink that is regarded as the most up-to standards drink given the taste and the sugar level contained in the drink. The Pepsi drink company has come up with diverse ways of advertising its products in a bid to ward off competition from other firms such as Coca-Cola. The slogan Drink it, to believe it serves to prove the validity of the manufacturer as far as their perception about the superiority of the drink is subject to consideration. As a result, the poster is not only intriguing but also captivating and thrilling to ensure an individual consumes the Pepsi soda. Despite playing second fiddle to Coca-Cola, Pepsi firm has adequately utilized the aspects of ethos, logos, and pathos in coming up with the poster.

The purpose of the visual is to denote the fact that believing the fact that Pepsi has sixty percent less sugar as well as having the authentic cola taste is by tasting it. From the poster, the slogan Drink it, to believe it underscores the solution to the doubtful people regarding the sugar content and the cola taste. The motto in the poster serves to convince an individual that Pepsi is proven to be the most reliable and suitable drink given the evidence of sixty-percent less sugar level as well as the genuine cola taste. The logos used in the poster supports the topic as underlined by the information regarding the sugar content as well as the palate. Another element of the logos relates to the actor and believer aspect which denotes that there is an individual who believes that Pepsi cola is the most suitable beverage. The phrase serves to quell the notion that one ought not to doubt the quality of the Pepsi cola.

Pathos refers to an attribute of ensuring the audience feels what the author or the creator of a given poster or advert wants them to feel. For instance, in the advertisement, Pepsi cola company wants the people or the audience to believe that Pepsi is the suitable and most preferred beverage drink. In the poster, the image of a frenzy Pepsi in a glass serves to denote that the drink is ready for consumption by an individual. The image helps to highlight the fact that Pepsi is not only suitable but also safe for human use. Also, there is an image of a man who is satisfied and seems to have derived pleasure from consuming Pepsi. The image not only underscores the importance of consuming the product, but also the satisfaction that accompanies the product.

Ethos serves to highlight a character who is behind a given poster or advertisement. In the poster, Pepsi company has used a famous actor: William Levy in a bid to ensure the audience have trust in the product. The stature of the actor serves to highlight the make the organization quest to convince the people to be reliable and convincing since the actor is prominent and has a large fan-base globally. Besides, underlining the name of the actor as well as the fact that he is a believer serves to convince the audience of the true nature of the firm and its product.

In conclusion, Pepsi managed to come up with a convincing poster as far as its product; the Pepsi cola is subject to consideration. The poster has effectively utilized the aspects of ethos, pathos, and logos to effectively ensure the information is not only captivating but also convincing and trustable.

3 0
report
This content was produced by one of our Experts or a Student. It should be used for reference purposes only.