In the past few years, the effectiveness and reputation of the country’s law enforcement have faced significant scrutiny because of the occurrence of several incidences of police brutality. Legally, the police have the discretion to determine when and how much force to use in the execution of their duty, which is the maintenance and restoration of law and order. Law enforcement officers are, however, obligated to ensure that their use of force is reasonable and necessary, but all too often, they fail to do this resulting in police brutality. Police brutality is a pervasive problem in law enforcement and is the greatest contributor to police misconduct. The unethical use of force by police officers is attributable to a variety of factors, which are cultural, institutional, and political in nature. Nevertheless, solutions to this dilemma exist, with some being continuous scenario-based training for law enforcement officials to empower them to make better decisions when confronted with situations that necessitate the use of force as well the adoption of the serve and protect standard as their basis for making decisions.

The nature of the work done by law enforcement officers often overshadows the complexities faced by these officials during their decision-making. Police officers usually encounter complex situations that demand immediate decisions and choices between proper and improper actions. The intense public scrutiny that officers have to endure when doing their work compounds the difficulty of making these decisions. Because of public mistrust and a lack of understanding of police work, officers may find themselves falling victim to public misconceptions about their duties and procedures. One of the areas in which officers often have to endure the most scrutiny is in their use of force. Law enforcement officers are permitted to employ force when effecting arrests and maintaining public order. However, sometimes officers behave unethically by abusing this power via the exercise of unnecessary and excessive force, a situation referred to as police brutality. Police brutality, particularly when highly publicized incidents are involved, often leads to negative attitudes toward law enforcement, making it a sensitive and tricky issue to handle (Weitzer 402). Consequently, it is vital to examine this problem in depth while identifying its causes and potential solutions.

In the USA, police brutality is a common yet poorly documented problem, with statistical data on this concern difficult to obtain. One such source detailing the issue was a 2006 BJS report that posited that of the over 26,000 citizen complaints about police brutality filed in 2002 among the large law enforcement agencies, approximately 2000 were found to be meritorious (Hickman 3). These statistics correspond to a rate of about 6.6 complaints about every 100 sworn officers in full-time employment, with most of these complaints filed in municipal police departments (Hickman 2). Excessive force or brutality represents the greatest proportion of reported incidences of police misconduct, thus making it the primary problem in this area. 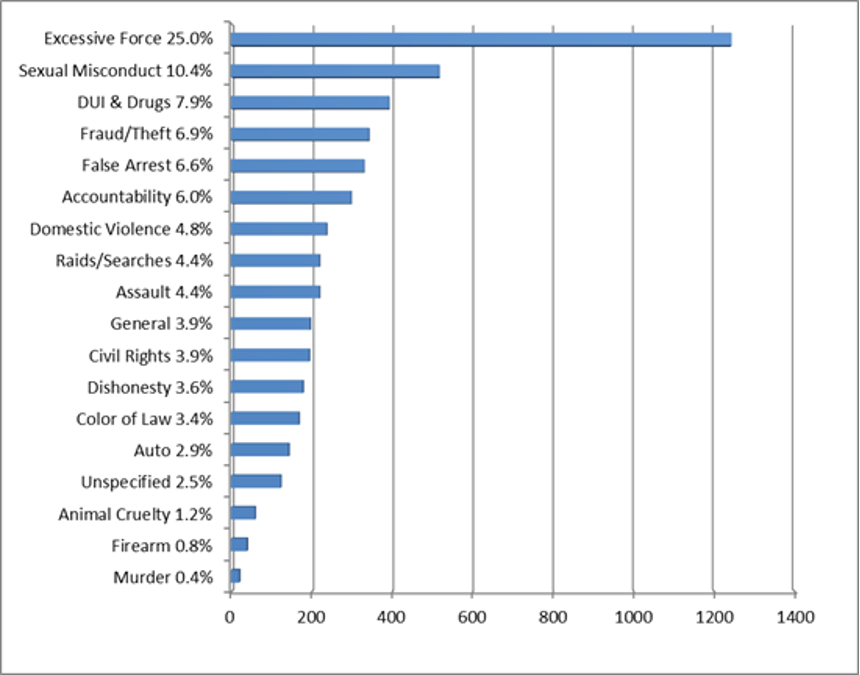 However, whereas these statistics indicate the existence of a problem, they fail to paint the full picture since most victims of police brutality do not file reports. The lack of reporting of these incidents is potentially associated with the non-existence of reporting and investigation mechanisms, as evidenced by the presence of civilian complaint review boards in only 19% of municipal police departments (Hickman 4). Consequently, police brutality continues to be a malignant issue in law enforcement.

One factor often cited as encouraging police brutality is the institutionalized police training systems. In this system, which is called the war model of policing, law enforcement officers are trained to perceive the fight against crime as war and, thus, the perpetrators of criminal activity as their enemies (Skolnick and Fyfe 181). Consequently, law enforcement officials are unlikely to have any regard for the ‘enemies’ rights and thus are likely to react brutally to them. Since these ‘enemies’ are more often found among minority populations and in the inner cities, it is no coincidence that this is where most police brutality occurs.

Another reason for police brutality lies in racial profiling. Sometimes, there exist racial, religious, socio-economical, and political differences between the police and ordinary citizens. Because of these differences, some law enforcers may perceive the population or a specific segment of it as being more deserving of chastisement than another subset is. Conversely, this same part of the population may view the officers as being their oppressors, which entrenches a culture of hate against them (Lum 55). Because of the mutual hate existent between the two groups, law enforcement officials are more likely to employ violence against those groups, thus causing police brutality. This situation is further exacerbated by the fact that the members of the oppressed group belong to relatively disenfranchised groups, for instance, the disabled, ethnic minorities, and the poor, and thus cannot pursue justice.

Police brutality is also attributable to the failings of the criminal justice system, which is highly unfriendly to victims of police brutality. Prosecutors often exhibit a reluctance to pursue cases of police brutality with the same zeal reserved for criminal activity. In fact, prosecutors often encourage police departments to conduct internal investigations into these matters as opposed to handling them publicly. Additionally, District Attorneys charged with prosecuting such police brutality depend on help given to them by the same police departments they are investigating. Officers in these departments often operate on a “Blue Code of Silence” where they conspire to cover up even the most blatant abuses (Skolnick and Fyfe 171). Consequently, such help is unlikely to be given willingly, therefore crippling the investigations.

The political system and its attitude toward criminal justice is another significant contributor to the prevalence of this type of police misconduct. Police organizations often operate with a high degree of independence and are subject to little or no oversight from the executive arm of the government. The absence of direct control over the police, while essential for the police operations, also means that there is precious little that the government can do to shape police street practice. Consequently, law enforcement officials operate by their own rules, which is disastrous because it creates the potential for abuse.

If unchecked, police brutality has the potential to fester and boil over, resulting in entrenched hate between the law enforcement officers and the citizenry they are meant to serve and protect. The spillover effect of this tension is the rise of protest movements such as Black Lives Matter and the resultant slide into anarchy, as witnessed in the riots that rocked places such as Los Angeles in 1992 in the wake of Rodney King’s arrest and beating. Even more recently, cities like Ferguson in Missouri have witnessed similar chaos primarily precipitated by the deadly shootings of unarmed black males by law enforcement officers. Consequently, it is imperative to seek solutions to this issue before any further escalation of these activities results.

One potential solution to police brutality is to introduce continuous ethics training to both fresh recruits and serving officers. Whereas this ethics training is already existent in many police academies, it is imperative to make it more feature-intensive than it is today (Sharps 10). Most ethical training today is abstract and fails to take into account the human emotions involved in police work. For example, an officer who has been led on a long cross-state car chase by a suspect may be highly emotional at the end of the pursuit. Consequently, this officer is likely to engage in a physical altercation with the suspect resulting in brutality, as demonstrated by the Dallas officer accused of kicking a prone, handcuffed suspect after bringing him into custody (Eiserer). Thus, for ethical training to work, it must be cognizant that officers as human beings lack an emotional on and off switch that would disengage their personal feelings during their work. Consequently, ethics training must be scenario-based in that it should simulate actual situations that officers are likely to encounter within a safe, controlled environment (Sharps 11). Here, the officers can freely make mistakes and learn from them, thus ensuring they can make the right decision when a similar situation arises in the field.

The Serve and Protect Principle

Another solution to this scourge is to emphasize operational conduct according to the serve and protect doctrine, which is the guiding oath for all law enforcement officers. Whereas many people assume that law enforcement officers are obligated to protect citizens, this is not so as established by the Supreme Court in a 2005 ruling (Greenhouse). Instead, officers are only constitutionally obligated to arrest lawbreakers, which means that the only time they are legally bound to act is when a crime is in progress or after. Consequently, before the offense commences, officers are guided by the ‘serve and protect’ principle, and it thus follows that this must be the basis of their ethical code. Hence, emphasizing the application of this code during interactions with citizens is arguably the best way to reduce the incidences of police brutality.

Of all forms of police misconduct, excessive use of force or police brutality is undoubtedly the most problematic. Whereas police have a mandate to use reasonable force in the performance of their duties, they sometimes exceed this threshold resulting in unethical conduct. Police brutality results from various factors, chief among them being racial profiling, the war model of policing, and inefficient political and criminal justice systems. Police brutality damages the reputation of law enforcement in the eyes of the public whom they exist to serve and hence is a sensitive issue. Whereas it is a potentially tricky problem to address, adopting continuous ethical training and reemphasizing the serve and protect doctrine may help in combating the issue.

Skolnick, Jerome, and James Fyfe. Above the Law. The Free Press, 1993.

7 0
report
This content was produced by one of our Experts or a Student. It should be used for reference purposes only.