Economists apply the Lorenz curve to measure income inequality within an economy. Max. O Lorenz developed the curve in 1905 to show total wealth distribution in a specified population (Christopoulos et al., 2017). The curve’s x-axis presents the cumulative income in a population, which is ranked based on income levels and ranges from 0 to 1 (0,1) (Bellù and Liberati, 2005). The y-axis represents the total proportion of income for a specific portion of the population. To construct a curve, one must first sort the income levels of the population then define the total amount of income owned by each person and their proportion to the total population. The next step is defining the cumulative of both the income and population and define the line of equidistribution income and finally plot the curve and should appear, as shown in figure 1. 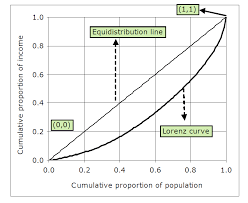 If everyone in the population had the same amount of income, then the curve would be the equidistributional line (Mauguen and Begg, 2016). For instance, if in a population of 1000 people each person got 1/1000 of the total income, then the curve would be the one represented by the equidistribution line. However, typically, there are rich and poor individuals in an economy, meaning the rich own more of the equidistributed income share than the poor. At high levels of income inequality, the distance between the Lorenz and the equidistributional curves enlarges, and vice versa. A shift of the curve upwards towards the equidistribution line shows a less income inequality state (Perkins et al., 2013). When this is represented graphically, one Lorenz curve appears higher than the other. The Lorenz curve on top can be referred to as Lorenz dominance that represents lower inequality than the other. However, it is not always a guarantee that when given two Lorenz curves, one will dominate the other, sometimes they can intersect (Perkins et al., 2013). Lorenz curves can, therefore, be implemented to be able to rank income distribution according to their inequalities as long as they do not intercross at any point. In the case that they do, then no comment can be made concerning income inequality.

The Lorenz curve can also be used to compute the Gini coefficient, or Gini index, which is applies to measure the economic equality in the context of a certain population. It was developed by Gini, who was an Italian statistician in 1912 from the work of Lorenz (Perkins et al., 2013). Its range is (0,1) 0 representing perfect equality also represented by 0% and 1 representing perfect inequality also given as 100% showing that one single person receives the entire income (Hur, 2019). Therefore, it is correct to say that a higher Gini index represents a greater degree of inequality. The Gini coefficient can be gotten from the area around the line of perfect income equality and the income distribution curve.

The coefficient is a number between 0 and 1. Figure 2 below shows how one can calculate the Gini coefficient (Perkins et al., 2013). The Gini coefficient can be used to measure income equality; however, it can also be used to gauge a populations wealth equality. Income and wealth are not synonymous as one can have much wealth but have little income. 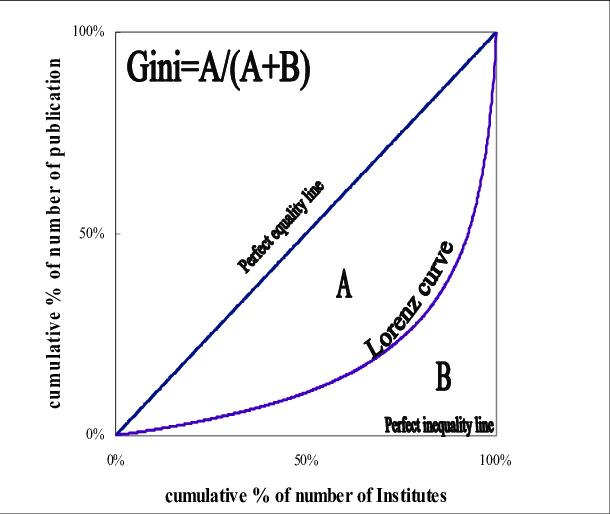 The Weakness of the Gini Coefficient

It only gives a number based on the official income and GDP of the country, and it does not take into account informal and illicit economic activities (Perkins et al., 2013). Most developing and less developed countries’ population have informal sectors of the economy that contribute to the lower income distribution. The result of income inequality will be overestimated as the lower-income distribution bracket is underestimated. Another fault of the Gini coefficient does not say whether the inequality occurs towards the centre of the income distribution, the top or the bottom percentiles.

In practice, the Gini coefficient calculated during the great recession of 2008 was found to be 0.705, which was a decrease from 0.722 recorded in 1988 (Perkins et al., 2013). The decrease in the coefficient meant that the inequality had declined due to economic development in less developed countries like Asia.