Through his unique and outstanding painting, The Bureau Doorway, Cyril Barraud portrays the early forms of industrial growth in Winnipeg. Even the early industrial revolution began in Britain in 1700, the ideologies were embraced to the other parts of Europe, America and the rest of the world between the 18th and 19th century. The new wave of industrialization was marked with the adoption of system of powering in the factories, mass production and special purpose mercenary. Textile and iron industries which assisted in the production of improved products were discovered. Winnipeg is one such city which had undergone total transformation following the industrial revolution. In the painting, The Bureau Doorway, 1914, Cyril portrays a number of features in Winnipeg which are associated to the early forms of industrial revolution. Alongside the early Canadian Architectural design, the painting also displays other features which are associated to the early industrial revolution such as improved mode of transportation, modern clothing’s which is attributed to the growth of textile industry, the use of electricity as a source of power and many processing factories.

Even though the industrialization was conceived in Britain in the 1700s, the ideas were adopted in other parts of Europe, America and the rest of the world later from 18th to the 19th century. The slow spread of the industrial revolution to the other parts of the world could be attributed to the notion of British Imperialism, where the British wanted to be considered to be superior to the other Europeans and the other races all over the world. By the beginning of the 18th century, the other European nations had begun embracing the same ideas on industrialization as the Britons and this culminated to the precedence of the Industrial revolution. During this time, industrialization was characterized with new features in the society such as adoption of electricity as a source of power, growth of cities and urban centers, development of steam engine, new mode of transportation, new products, growth of processing factories, increased commercialization, improved communication and new banking systems. In his painting, The Bureau Doorway, 1914, Cyril Barraud has depicted numerous features of industrial revolution in Winnipeg.

Cyril Henry Barraud is a British-born Canadian who arrived in Manitoba, Canada in 1913 and later on became the leading personality in Winnipeg arts community. Barraud was the son of Herbert Rose Barraud. He attended his early education at Downside School and then joined Brighton School of Art where he was later employed as the manager before transforming into a full-time artist. In 1915, he occupied the Presidency post of the Manitoba Society of Artists and Craftsmen. He was also the founder of Winnipeg Art Club. Being an experienced printmaker and artist, Barrauds skills were used after he was posted as a lieutenant in the 43rd Battalion of the Canadian forces. During this time he was able to make sketches of the war torn France. His major works include the landscapes of Essex, Rye, Thames Estuary, Suffolk and Kent.

Formal analysis of the painting

Barraud’s painting has been produced in such a way that it occupies a large physical size to magnify the present features of industrialization in the painting. The large size of this image has made it easier for the artist to make a greater emphasis on the numerous features of industrial revolution which were present at the main center of the city of Winnipeg during this time. For example, the viewers can easily locate features such as industries, large buildings, and people putting on cloths, roads, electricity lines and horse drawn chariot. The presence of the large buildings at the background of the painting can be used to infer to the existence of commercial activities during this time.

Barraud opted to use dull colors while painting this image. Since colors are of great significance to any painting, Barraud opted for dull colors to give specific meanings. In this case, the dull colors were used to give a reflection of the period in which the shown industrial changes were taking place in the society. The dull nature of features in the painting is an indication that the early form of industrial revolution in Winnipeg occurred in the early centuries, between 18th and 19th centuries. Barraud’s use of dull colors in this painting is therefore of great significance to his objectives for creating this image.

The simplistic nature of this painting alongside its main features is an indication that it was produced before the period of modernity. The use of simple materials for the painting greatly contradicts with the modern forms of paintings that are characterized with sophisticated features such as bright colors, perfect images and clear background. Features such as buildings are painted with dull colors to indicate that they were old structures. The theme of this painting is also an indication that it is a traditional form of painting.

Putting the Painting in the Artists Historical Context of Production

This painting was inspired by the radical nature of changes that were taking place around the author. The main intention of the author was to give a reflection on the new features and life trends which were taking shape in the society around him. As a result of revolution, the Winnipeg community had begun embracing new aspects of life such as the introduction of advanced products, facilities and new ways of doing this which were more simplified.

Putting the Work in Its Historical Context

Barraud’s painting was produced towards the end of the 19th century. During this time, most parts of the world had not yet anticipated the full impacts of revolution. The few nations which had adopted full industrialization began competing to attain dominance over the world by exercising their great military powers and this resulted into the emergence of the world wars. This great period of millenarianism therefore facilitated the occurrence of industrial revolution in Winnipeg.

Comparison with another Artwork.

Barraud’s painting the Bureau Doorway, 1914 depicts a similar concept of industrial revolution as that in Alison Newton’s painting, Grading Onions, near Gonor. Both paintings draws the features industrialization such as the use of machines, clothing’s, new products and other patterns which were being embraced at Winnipeg. The similarity of these two paintings is therefore an indication of the magnitude of transformation that were taking place in the Canadian society and particularly in Winnipeg.

To sum it up, Barraud has effectively used his painting, The Bureau Doorway, 1914, to give a clear depiction of the early stages of industrial revolution which was anticipated in Winnipeg during his time of painting. He has achieved this objective by focusing his painting to a number of features which were attributed to the early form of industrialization. Some of the features depicted in Barraud’s painting are the use of machines, presence of factories, improved mode of communication, clothing’s which signify the growth of textile industry, electricity lines and new architectural designs. Barraud’s Bureau Doorway painting is similar to Newton’s, Grading Onions, near Gonor painting in that, both painting emphasizes on the industrial revolution which took place at Winnipeg during the late 19th century. 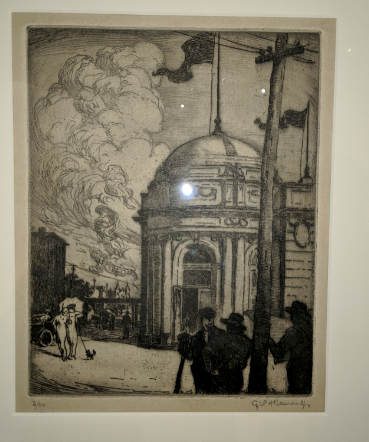 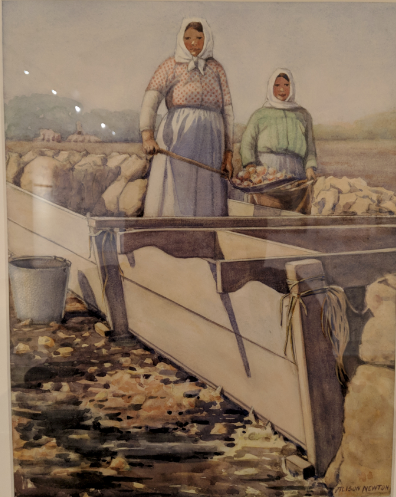