Home / Sample base / Bio-Process and Chemistry in Industry

Bio-Process and Chemistry in Industry

Over time, microalgae have received much interest as a biofuel feedback in response to the uprising energy crisis, climate change, and depletion of natural resources. This development of biofuels from microalgae does not meet the rising demand of economic feasibility over overwhelming capital investment and operations. However, high value co-products have ben produced through the extraction of algae to improve the economics of a microalgae bio refinery such as pigments, proteins, lipids, carbohydrates, vitamins, and anti-oxidants. Microalgae are photosynthetic organism tha5 grow in a range of aquatic habitats, including lakes, pond, and oceans. These are applied in cosmetics, nutritional, and pharmaceutical industries to attain the sustainability of this process in the form of high value products and biofuel. This paper will give an insight in the current challenges in the extraction of high value products from microalgae and its integration in the bio refinery.

Evaluating the Critical Techniques for Large-Scale Microalgae Production, Including the Raw Material for Biomass Production and Process Comparing To That Produced In Open Ponds

Industrial cultivation of microalgae to produce biofuel has increased dramatically over the last few decades. However, they are produced in large quantity and sold directly as food and nutrient supplements, while their processed products are or extracts are used in biopharmaceuticals and cosmetics. Bioenergy and microalgae energy are rapidly increasing in the global demand significantly in regard to the growing world population. It is advantageous features produced from biomass are renewability and significant smaller contribution to the environmental pollution and global warming. Essentially, selection and development of biomass is a crucial cost limiting phase in biofuels generation for adjusting and optimizing energy structure and cost. Microalgae are proving to be a clear remedy for bioenergy production as a most promising raw material to compensate and balance the ever increasing demand for biofuel.

Biorefinery is a process to obtain biofuels, energy, and high value products through biomass transformation and process equipment. This is the promising approach to mitigate the emission of greenhouse gases which are threat to the environment in terms of global warming effects. This is however achievable through the use of simple, low energy, cost effective, and scalable separation of process. This is where microalgae are classified as potential candidate in biorefinery process.

The harvesting of biomass followed by bio refinery techniques has assisted much in the integration of biomass convention processes. The use of mild separation technologies, which do not involve high pressure and solvents are significant for the production of desired compounds without damaging other fractions. The use of right approach for microalgae biorefineries depends on the required energy input and availability of modern technology. Elements such as coagulants which prevent fouling on the membrane surface enhancing filtration flux. They are important because they improve the harvesting of microalgae. The DSP processes also improve the processing in terms of economic, simplicity and ease of subsequent processing steps. The main factors affecting the choice of convention process are quality and type of biomass feedback, economic considerations, specification of projects, and the end form of the desri4eed product. 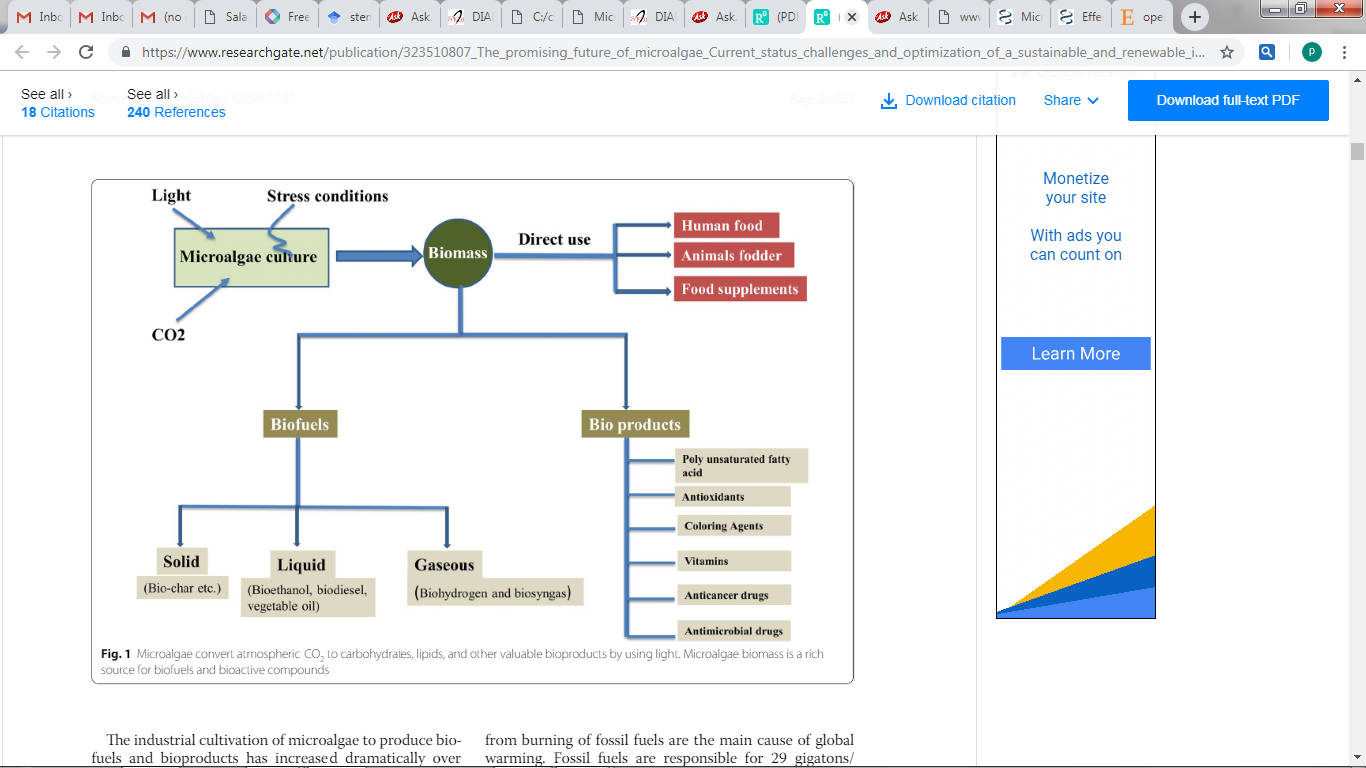 The major biofuel are biodiesel, bioethanol, biogas, and bio-hydrogen. The cellulosic algae structure provides huge amount of carbohydrates that can be used for bioethanol production. Bioethanol are derived from sugar fermentation which results from the combination of hydrogen. In the process few microalgae species consists of more than 50% of starch, glucose, and cellulose. By their dry weight and absolute absence of lignin makes it a potential raw material for bioethanol production. Algae biodiesel have substantial potential to use as a substitute for petrol chemical diesel because of its technical competence of no changes in engine design. Algae biodiesel is a biodegradable, non-toxic and with favorable combustion emission profile, producing much less carbon dioxide, Sulphur dioxide, and unburned hydrocarbons than petroleum-based diesel fuel. Algae biodesiesel contributes towards neutral process, because they don’t result in fossil carbon being released into the atmosphere. This is significant because most of the carbon released is absorbed by the algae through photosynthesis. Their effects are neutralized by the living algae thus significantly not harmful compared to fossil fuel which increases the level of Carbon dioxide in the atmosphere.

The company wants to invest in water

To fully characterize water quality, consideration is made which includes physical parameter and chemical. Physical includes suspend particles, temperature, conductivity, and total dissolved solids. This can be treated by vapor pressure and freezing points of water. 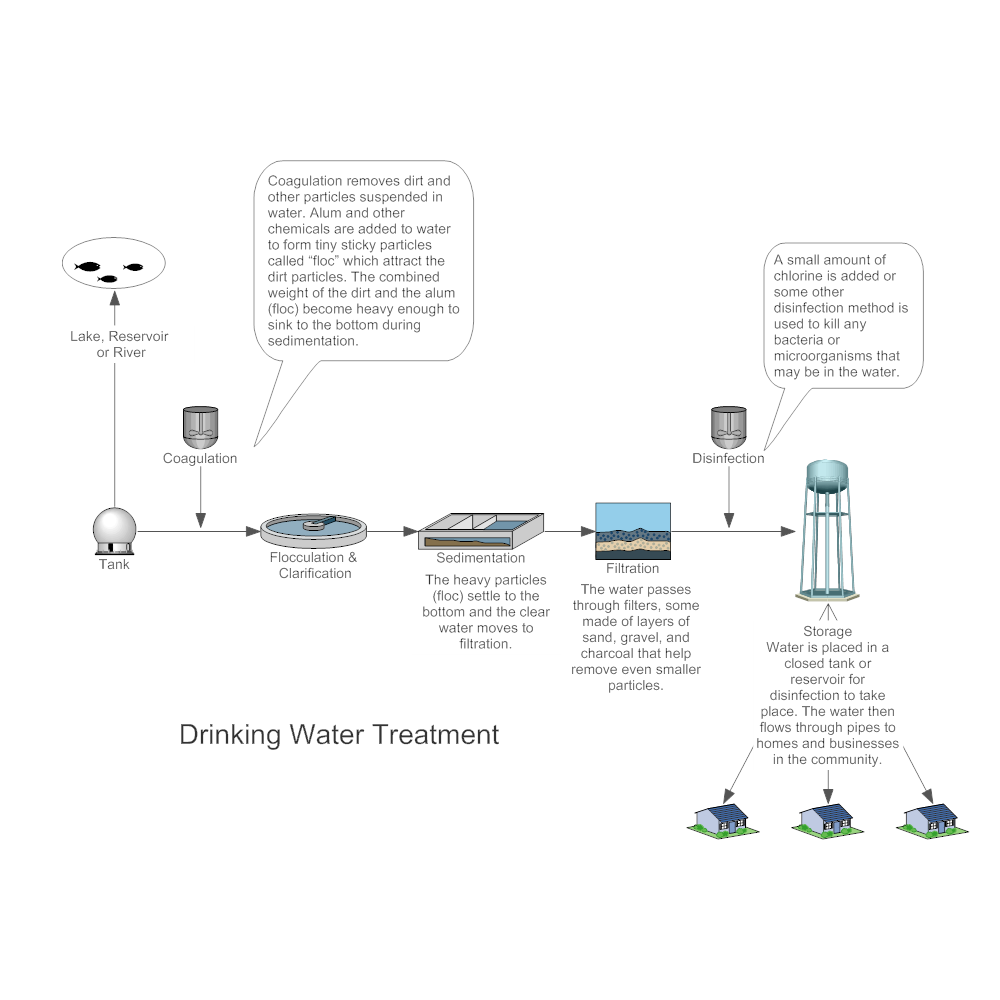 In this case the process involves many stages which will clear water from all impurities such as those for metallic substances and chemicals. The use of conductivity measurement systems, two metallic electrodes is immersed in a liquid to complete an electrical circuit. These electrodes types sensors work well in relatively clean water, however, those accuracy if coated by dirt contaminants, they may interfere with the flow of current. Significantly, the flow is designed to increase the velocity of the flowing samples in the specific direction. Chemical parameters are divided into inorganic and organic. Inorganic parameter includes Ph, alkalinity, hardness, and dissolved oxygen. Organic parameters are dealt with in laboratory because of their nature. Inorganic such as alkalinity can be work on through titration in the isolated sample of water while testing its Ph. Hard water are washed out by rain containing carbonic acid under formation of their soluble bicarbonates.