Ancient Near East (Mesopotamia) and The Ancient Aegean Art 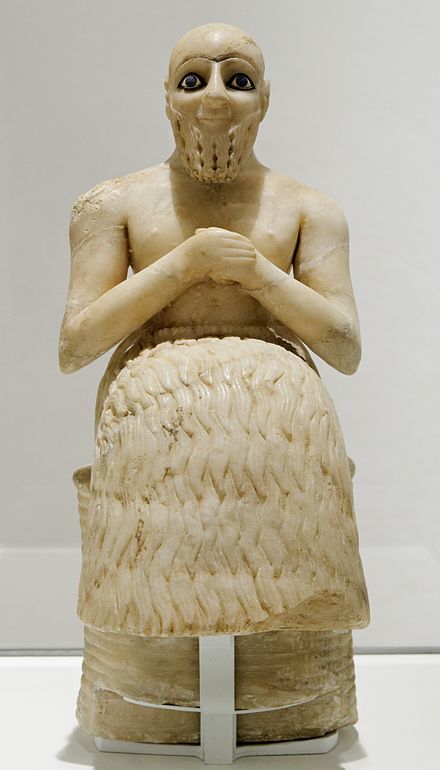 Description: the statue is that of a praying man seated on a wicker hassock, its composition is schist inlays, gypsum, translucent alabaster, and shells. The man, who seems to be dedicating himself to a deity, is shaved with a long beard with a long face conveying a smile. The figure also has a thin waist and bare torso and his elaborate clothing, a kaunake, is woven from the hide (Visual-Arts-Cork, 2017).

Historical Value: the kingdom made the statue with the intent of being placed in a palace or temple as a dedication to their gods. The clasped hands of the sculpture depict people who believed in a deity. An analysis of the inscriptions on the statues represent the classes which were evident during the time. The figure’s interpretation could mean a sign Ebih-il’s devotion and longing to his goddess Ishtar from the gaze and smile on his face, which would suggest the people’s dedication to their leaders and beliefs (Visual-Arts-Cork, 2017).

Analysis of the region: during this period the region was united for a long time under their kings. The life-like figures were a dedication in honor of the stability the leaders had imparted into the area. The products used in making the statue speak volumes about the relationship the Middle East had with its neighbors, there were long-standing relationships that enabled the exchange of bitumen and shells. It also depicts the tremendous advancements in the art that occurred during this period, moving on from stone to finer material, which was expensive and valuable (Visual-Arts-Cork, 2017) . 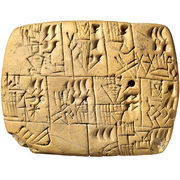 Description: the tablet’s original composition was clay, and the writing is in cuneiform. They used it in allocating beer rations to employees since it was also a mode of payment. It began as a pictograph, but evolved to depict the sounds of words, with the symbols made by the stylus being wedge-shaped. The inscribers drew the symbols while the tablet was still soft, then the clay was left to dry after the inscription, in the sun or a kiln, making it indestructible (Visual-Arts-Cork, 2017).

Historical value: the tablets’ origin is Uruk, Mesopotamia, and their primary purpose was to serve as a record for the kingdom’s institutions. Since Uruk was an urban center, the need for book-keeping was prevalent, due to the complexity of the city’s economy. It is also critical to note that only some few scribes knew the cuneiform language, and the tablets can depict a form of hierarchy since only the top leadership could record legal documents for the city. Being one of the earliest forms of writing It also means it was a unifying factor while setting the stage for improvement (Visual-Arts-Cork, 2017).

Analysis of the Region; during this period peace prevailed and there was a community sense of living. The people had leaders who they trusted, both religious and political. They settled and gained a lifestyle, and they undertook farming and domesticated animals. They also increased security and prosperity which led to cultural and religious advancements. 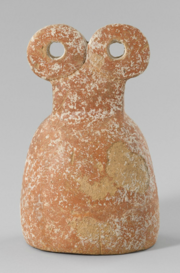 Description: the pottery has a body that is bell-shaped, with a cylindrical neck, while on top it has two perforated circles. Its base is flat which enables it to stand freely. The figure’s original composition is clay, covered with an orange-red color that is still shiny despite its concrete form.

Historical Value: a wide distribution of these pottery points to believing in religions across Mesopotamia, this is because they were mostly found in temples and they represented offerings or stylized depictions of worshippers, while the presence of the different eyes represented a supreme being. It is also a different debate that the idols were just standard weights or instruments used in weaving and spinning (Visual-Arts-Cork, 2017) .

Analysis of the Region: this period also saw stability, and a more organized and literate society than the Mesolithic art, where stone tools and weapons application were extensive. Trade was also thriving during this period, and it was during this era that Mesopotamians started displaying devotion to a supreme being with their pottery and statues. There was also the establishment of kingships to take over from priests; all these gave rise to sophistication in pottery, ornate statuary and temples.

Description: This is a Roman marble representation of one of the Greek’s finest sculptures in classical art by prominent sculptor Polykleitos. It depicts a well-built muscled warrior bearing a spear on his shoulder. It is made from marble, unlike the lost original, which was crafted out of bronze. It is about 6 feet long and is almost life-like (Visual-Arts-Cork, 2017).

Historical Value: this sculpture was made during a period where the emphasis was placed on ideal men using nudity. Greek sculptors wanted to represent a person with characteristics of their gods such as Achilles. It was also a representation of the emphasis placed on youth and athleticism due to how the figure is standing; this also represented a level of equilibrium and perfection. The use of bronze is also a transition to superiority (Visual-Arts-Cork, 2017).

Analysis of the region; during this period there is peace after the Greek had beaten the Persians in 490 BC, even though the figure depicts a warrior, analysts say it was a sign of sophistication, as he did not have anybody armor. This sculpture also depicts that the Greek was cohesive which can be illustrated by the labor-intensive projects they undertook. The region also replaced the kingdoms with states and oligarchies. We are witnessing a region under resurgence. 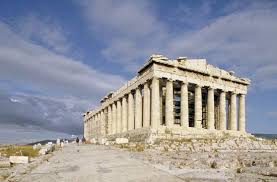 Title: Parthenon, (Temple of the Virgin)

Description; the temple which is one of the most magnificent structures in Greece, was built as a dedication to Athena, patron goddess of the city. It was also built to house the goddess’s statue and also to proclaim the success of Greek forces after defeating the Persians. The temple still exists, and despite all the hardships of weather looting and explosions it is still as magnificent (Visual-Arts-Cork, 2017).

Historical Value: the temple being one of the most important in Athens took a lot of money and labor to complete, and after its completion, they placed Athena’s statue in the temple. The statue and the temple usually represent one of the most stylistic breakthroughs in Greece, and the building has influenced modern architecture centuries after laying the foundation. The temple depicted the Greek way of life, their attention to detail, as well as their understanding of harmony, which has been applied in mathematics concepts today (Visual-Arts-Cork, 2017).

Analysis of the Region: Greece had just won the war between them and Persia and they wanted to stamp their dominance in the region. So using war treasure, they replaced the damages to the temple and also embarked on a massive project to turn Athens into a glorified city. Greek was also displaying its democracy to the world through achievements such as this one, as every citizen had a say, through the assembly which converged next to the Acropolis.

Description: The Aphrodite of Melos is a Greek statue and also one of the most renowned. It is made of marble and stands at almost seven feet tall (Visual-Arts-Cork, 2017).

Historical Value: the sculpture has also influenced modern art enthusiasts, with artists trying to recreate the sculpture. The sculpture reflects the aesthetics, and innovativeness of the second-century artists, with the emphasis on the Greek tradition, harmony, impassivity, and nudity being hallmarks of that period (Visual-Arts-Cork, 2017).

Analysis of the region: this statue emboldens Greece during the Hellenistic era, this was during the period after the Greek Empire had reduced into entities, the Greek culture was dominating, but the architecture was undergoing a decline. In their quest for more expressionism, architects in Greece went back to creating more great projects; this led to the creation of sculptures such as the Venus.